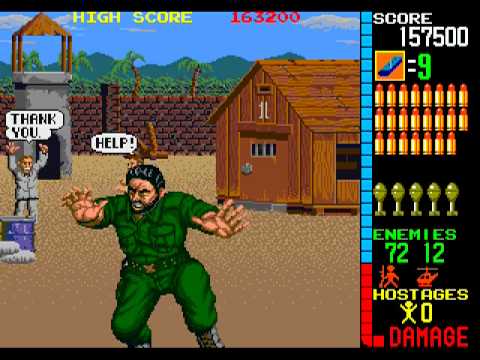 It would seem the second loop should be impossible to complete, but one person has submitted a score of 6,211,200 points at Twin Galaxies. I’m curious what was going on in that play, because all decent score entries and all scores in YT videos are around 400K. Best score from an arcade machine submitted to Twin Galaxies (212,350 points) was done in 1987.

This was played on mouse so it’s much easier compared to original arcade cabinet. MAME won’t record target crosshair, I could get it with FRAPS, but that’s something imo not necessary in video.

Rescued all hostages, but shot one of each civilian to show how they die. Also included fail ending. First loop cleared without using grenades.